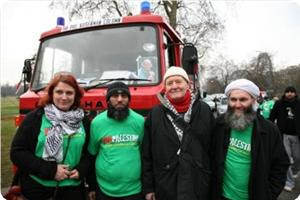 GAZA, (PIC)-- The British Justice for Gaza convoy was able to enter the Gaza Strip through the Rafah border crossing on Saturday evening.

Adel Zurub, the information officer of the governmental anti-siege committee and the spokesman for the crossings and borders, said that the convoy which includes seven to nine medium-sized trucks loaded with medicines and medical equipment were allowed into the Palestinian Rafah city on its way to Gaza city, noting that the convoy includes 19 British activists.

According to Zurub, the Palestinian government and the Gaza people have welcomed the convoy and thanked them for the sacrifices the organizers have made along that lengthy journey with the aim to extend a helping hand to the besieged Palestinian people in that tiny coastal Strip.

It was reported that this British convoy succeeded in passing through the Rafah crossing after 60 US female peace activists from the organization of codepink women for peace had earlier managed to cross into Gaza to express their solidarity with the Palestinian women and demand the lifting of the Israeli siege on Gaza.

Spokesman for the codepink delegation Medea Benjamin told journalists that the aim of their visit is to draw the attention of the US administration of president Barack Obama to the need to lift the siege on Gaza and to launch a new peace process and aims to declare solidarity with the besieged Gaza people especially the Palestinian women on the occasionof the international women's day which is marked on the eighth of March.

Benjamin noted that the delegation comprises 60 European and American activists, doctors and international woman leaders carrying 2,000 gift baskets for the women in Gaza to honor and support their steadfastness against the Israeli occupation.

She added that the American women feel great sympathy for the Gaza women and demand Obama to allocate part of the budget to support health and education in the Strip instead of directing support for Israel and providing it with warplanes and bombs that kill children in Gaza.

The delegation includes the noted American novelist Alice Walker, a Pulitzer laureate, and the parents of slain US peace activist Rachel Corrie, who was killed by an Israeli bulldozer during her attempt to prevent it from demolishing a Palestinian home in Rafah in 2003.