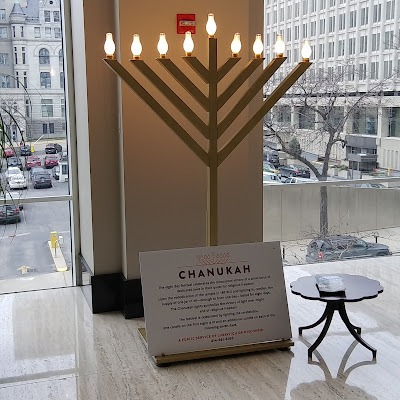 Well, well, well... I stepped into the US Bank building [the tallest building in the city] in downtown Milwaukee to take a break from protesting unfair labor practices of Northwestern Mutual Insurance (across the street) and what do I see but this... lovely, cute....

with an explanation of Chanukah...

setup as "a public service of Lubavitch of Wisconsin"...

who the HELL are they?

Geez I thought, it would be charming to have a nativity scene next to it... describing the birth of baby Jesus, the Christ, the Savior of the world. Ah but that would be anti-Chanukah, me thinks, and not permitted in a public building.

P.S. Milwaukee was bereft of Christmas images, unless you want to count snow flakes hanging on the facades public buildings and light poles. For how the jews stole Christmas, listen to Brother Nathanael here, read about it here and here.
at 12/21/2017 4 comments:


It's OK to collude with Russia if its done for Israel, according an opinion piece in the Jewish Forward magazine here.
at 12/05/2017 No comments: 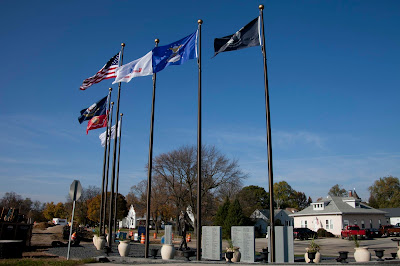 Because of the patriotism of Mr. Snider, “Remember the USS Liberty” will be forever screaming from a veterans memorial walkway, from a village in the heartland of America.
at 11/14/2017 3 comments:

Regardless of what is or is not true about the Vegas mass murder, there is no doubt it is a false flag carried out by psychopaths. From information coming out it is apparent that Paddock and the scenario set up around him was in the works for at least a year. Unwashed Tribe Toilet Bowl website, TMZ is reporting that Paddock was scanning a number of musical festivals such as Lollapalooza and others a good while ago. This means the people who actually carried out the attack were in the planning stages for quite awhile. There is no doubt they are convinced the American public is fantastically stupid...

By now there can be no question that the attack was carried out by an organized team of demonically possessed monsters. Obviously the guns identified as the guns used could not have caused such carnage. Obviously the official line is absurd but that was also the case during the Israeli-dual national orchestrated attacks on 9/11. To this day the official public response is, “I don't want to hear about it.” They move through life with emojis dancing over their heads, texting in traffic, visiting Tinder and eating foods designed to make them suffer through the latter part of their life before it painfully and ignominiously puts them to death; as if they were ever alive in the first place. As hard as it is to say and as difficult as it is to accept it, they deserve what they get.

Bigger questions are; when is Trump going to give any indication that he knows the tale being told about what happened is ridiculous? When are ranking law enforcement personnel going to publicly decry the fantastic claims that have been made about the fabricated actions of the dead patsy taking the fall? When is Breitbart and others, allegedly engaged in exposing the Tribe engineered domestic Communist insurgency going to even ask questions about the inconsistencies that are so wide of anything remotely approaching the truth that you could drive a LeTourneau's L-2350 loader between the two most logical inconsistencies and close your eyes during the process while not hitting anything. What a load of stinking, reeking hyena shit!

Okay... let's say that the Satanic, near completely Tribe owned media, is managing to control the flow of information to the extent that no one is able to offer a conflicting perspective, opinion or eye witness evidence. Sure, there was the Australian fellow with a few things to say and included his hearing machine gun(s) and the strange couple at the festival who were shouting that everyone is going to die and a few other tidbits; like the 4channel warning from anonymous John, who cautioned the readers to stay away from Vegas and Henderson, wherever Henderson is. Anyway... let's say they have mostly managed to shut down any contrary information up to this point but there are all sorts of ways that like minded sorts can stage enough collective outrage where the media has to respond. Maybe it's too early but it seems to me that the larger mass of the population gives the impression of being so moronically credulous as to stun the casual observer standing apart from them and not under the influence of whatever toxic gas they have been exposed to.

P.S. Read the rest of Visible's excellent article, which happens to express my sentiments exactly here. Visible provides some excellent links to his article which point out that the "largest mass murder in American history" in  Las Vegas was obviously a government psychological operation. As I stated in a comment elsewhere, no one so crazy that might dream of pulling this off would have the coherence to pull it off. But there are people so evil serving an organized evil agenda capable of doing it.

P.P.S. Can any internet truther considering him or her self an expert analyst of political matters not see through this latest government psychological operation? Is that possible? Yes, when an agenda of personal hubris gets in their eyes, as is the case with the dope who made this post. Alex Jones is a dope. The dope I'm referring to is the editor of the linked post. AND SAID DOPE IS CONSTANTLY VYING FOR LEADERSHIP OF THE INTERNET TRUTH COMMUNINTY! HE'S AN HONEST BROKER OF THE TRUTH!


John finishes his interview asserting my same sentiments, i.e., the jews must be stopped now if mankind is to survive... but unfortunately he doesn't see any signs of that happening. Yes, the goyim are very well corralled indeed.

Listen to John Kaminski being interviewed on Andrew Carrington Hitchcock's show of 8/17/2017 here.

John has a new website where the goyim can be educated via his writings here.

Why is it that every time I listen to John that it seems he's stating everything that I'm seeing? Could it be that I'm just another anti-Semite?

All kidding aside, I am anti-jewish because I am a child of God, a person with a conscience.
at 8/17/2017 No comments:

A Pleasant Conversation About the Holocaust

Dr. Kollerstrom is interviewed by Kevin West about his book on the Holocaust “Breaking the Spell.”

Hitler Still Has It !


More then ever we need a leader that is loved by the people and willing to stand up for them. We certainly don't need any more of the usual clowns (shabbas goyim) that are loved by the jews in charge and standing up for them.
at 6/26/2017 No comments:

The first day of the week cometh Mary Magdalene early, when it was yet dark, unto the sepulchre, and seeth the stone taken away from the sepulchre.

Then the same day at evening, being the first day of the week, when the doors were shut where the disciples were assembled FOR FEAR OF THE JEWS, came Jesus and stood in the midst, and saith unto them, Peace be unto you.

CHRIST IS RISEN. FEAR THE JEWS NO MORE.

P.S. And that includes you, Mr. Trump.  A simple "Happy Easter" would've been much bettter, Mr. Trump. Oh I realize that America is not a Christian country. America's dumbed-down, idiotic judeo-christians need only look here and here to confirm that.
at 4/16/2017 1 comment:

Can You Handle The Facts About Jews?

The Partisan by Brother Nathanael


Do jews control America? I think that's becoming ever more obvious... doncha think? Or, doncha think?
at 3/08/2017 No comments:

Will Trump Be Assassinated?


Will Trump be assassinated? See a compelling, timely article on the subject here.

Will Trump be assassinated? If Trump turns out to be the real deal regards truly representing Americans and freeing America from its jewish yoke, I have no doubt that if he is not assassinated on or before his swearing in for the presidency, the jewish controlling powers will attempt to JFK him... if they can't overthrow him via a coup.

Unfortunately most Americans would go along with a coup, as they would believe the jewish MSM's justification for it. No, they wouldn't start a revolution... as one typical Republican dope... who currently thinks Trump is taking back America from the Muslims... suggested to me. Americans won't revolt against a coup... BECAUSE THAT WOULD BE ANTI-SEMITIC!!!
at 1/17/2017 No comments: