Detroit — In a company where the top jobs frequently go to graduates of Midwestern engineering schools — or to heirs of the founding family — Mark Fields’s rise to the top of Ford Motor Co. was hardly a sure thing.

But then, in an earlier era, when the Fields family name was Finkelman and the name of the company’s leader was Henry Ford, the odds would have been nil, or worse.

Just as Finkelman became Fields, however, the automaker founded by one of America’s most notorious anti-Semites has transformed itself over the decades. When Ford named Fields as its president and CEO on May 1, the 53-year-old executive became not just the first Jew to run that company, but also the first Jew to head any of the major U.S. automakers.

Said Jeffrey Gurock, a professor of Jewish history at Yeshiva University: “I don’t think Henry Ford would have dreamed of a day where a Jew would [be] the head of his motor company. Part of his anti-Semitism was that Jews control but don’t work. He never would have dreamed that there would be a Jew putting people to work in the Ford Motor Company.”

P.S. The title of this post is the same title the jewish Forward used in its email of this article. The metadata title to the above picture used in the article is "sweet revenge". The jews will have their sweet revenge on all of America... and all American goyim.. for their jingoed up persecution complex... if they have their way. American goyim, wake up. The jews are having their way. Is that good for everybody?

P.P.S. American jews are aware of and have read Henry Ford's International Jew, shouldn't American goyim also be so privileged?
at 5/27/2014 No comments:

The “ADL Global 100” report released May 13, 2014, surveyed more than 100 countries to determine the extent of anti-Jewish sentiment worldwide.

The survey found that 26 percent — more than one in four — of the 53,100 adults surveyed are “deeply infected” with anti-Semitic attitudes. The survey was conducted in 102 countries, from Argentina to Vietnam.

P.S.  I would say that 26 percent of the adults surveyed proved to be jew wise.


P.P.S. According to the Jewish TelegraphAgency, the survey gauged anti-Semitism by asking whether respondents agreed with an index of 11 statements that the ADL believes suggest anti-Jewish bias:

NFL Presents Celebration That Can Not Be Ignored


Call me a prude, call me old fashioned, call me homophobic... call me anything that indicates that I am not accepting and acquiescing to this debauchery [of Michael Sam sharing cake and a kiss with his boy friend]. Any of those things is better.

Americans, this celebration was presented right in your faces. It can not be ignored. You can't pretend the degeneration of your society isn't happening. It's being flaunted and celebrated, in your faces, in and by the industry of your favorite pastime. Pretending this isn't happening; not protesting this, is accepting it.

Will there be any protest of this? Is there enough health and decency in the American public body to protest and throw this off?... to refuse to accept this as normal and acceptable for America? I sure hope so... or there is no hope.

P.S. Objection to the debauchery into which our American society is being led is being quickly nipped in the bud:


Safety Don Jones of the Miami Dolphins has been fined an undisclosed amount and excused from team activities after reacting to video of St. Louis Rams draftee Michael Sam via social media, the team announced Sunday night.

"I want to apologize to Michael Sam for the inappropriate comments that I made last night on social media," Jones said in a statement released by the team. "I take full responsibility for them, and I regret that these tweets took away from his draft moment.

"I remember last year when I was drafted in the seventh round and all of the emotions and happiness I felt when I received the call that gave me an opportunity to play for an NFL team and I wish him all the best in his NFL career.

"I sincerely apologize to Mr. Ross, my teammates, coaches, staff and fans for these tweets. I am committed to represent the values of the Miami Dolphins organization and appreciate the opportunity I have been given to do so going forward."

After witnessing Sam kiss his boyfriend on television, Jones tweeted "omg" and later "horrible" to a fan who asked if the safety was referring to the kiss.

Jones is expected to complete educational training for his comments.

Pic of the Day: Goodbye Goyim 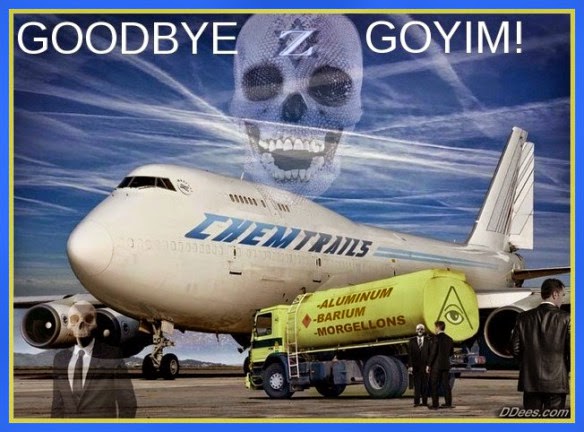 The above pic of the day was found posted at Pragmatic Witness. Why can't we know what they're spraying? This won't stop unless we stop it.