Being jewish is a choice, a choice of exceptionalism based on lies and myths. To be jewish is to be a fraud. Truth eventually becomes "anti-Semitic". We can't have the truth about how jews control everything. That'd be "anti-Semitic". We can't have the truth about what really happened in Germany in WW2. That'd really be "anti-Semitic". That would expose the lie of the "holocaust". When someone informs you they are jewish, they are informing you that loyalty to their jewishness, the tribe, trumps truth and justice... and certainly any friendship with any goyim.
at 4/24/2013 No comments:

Give Us More Homeland Seurity!!!

Giving Credit Where It's Due 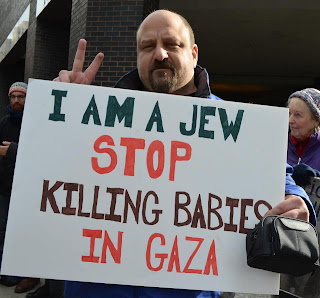 The Ugly Truth's diminutive demagogue Mark Glenn is "giving credit where it's due" by posting the above pic on his blog [see it here].

Who is this person that's getting his "due credit" from the  diminutive demagogue at the Ugly Truth? One commentator to the post, Tangy Tangerine, lets us know:

That’s Jon Gold in the pic. He’s been a fake/mossad “911 truther” for perhaps 10 years. He’s a pillar at 911blogger. His own site is http://yourbbsucks.com. He glommed onto the 911 survivor families early on as his cause celeb, such that the ZIHOP site http://wtcdemolition.com/blog/blog/213 nicknamed him “911 Family Guy”. He had some(?) role in the production of the very slick LIHOP docu’ called “911: Press For Truth”, released around ’05, and enshrining the “scary moozlems did 911″ myth. He’s quick to wield the “anti-Shlomo-ite!”, “holohoax denier!”, “nazi!” yada yada flame torches at real Truthers who finger Israel, “jewish behavior patterns” etc too persuasively.

How many [Arab] babies has Gold (-stein? -berg?) contributed to the killing of in the 911 wars, through his tireless efforts to “lead” the 911 TM into believing LIHOP, (aka scary moozlems did it therefore the judeo-war-on-terror-hoax is legit), and his “shaming” truthers away from the israhell avenue of 911 inquiry? Frauds like him surely helped DELAY folks like me coming to the ZIHOP conclusion.

If you knew Jon Gold, as perfectly described above by TangyTangerine, you would never trust him.

With almost all Jews it’s always a tribal thing. They have to use names like “Jews for Palestine” and Jews for this and that precisely because they can’t help but view themselves as separate and put themselves above everyone else. Theirs is a never-diminishing desire to frame and control the debate to perpetuate their image as decent people and innocent victims.

Gee zanks Mark Glenn for being so wise and magnanimous and "giving credit where it's due"... even when it comes from the cesspool-of-lies jewish community. I know you're concerned about your credibility with the jewish MSM and average dumbed-down-to-idiocy Americans, and you stick to your guns (a la  your take on Sandy Hook), so I'm wondering whether you'll give this guy, Jon Gold, a chance to defend himself, with an interview, against those dyed-in-the-wool, anti-semitic commentators to your post. I know this post on your blog wasn't a mistake. You don't make mistakes. Prove it and give the guy an interview. If you don't do it soon, your buddy the truth jihadist, Kevin Barret, might beat you to it. We know  you want to be first in being right about things (a la your brilliant call on the Pope).

What's that? You have bigger fish to fry? But Mark, these little fish of yours are piling up. Your adoring fans might start thinking that you're... heaven forbid... maybe not the brightest bulb, and fallible like them. That Sandy Hook fish just may be getting the better of you, and consequently your A team. How you are handling that one is very telling. Your narcissism and petulance are shining through (apparently more than you realize), and they are very entertaining (at your expense).
at 4/05/2013 5 comments: