Is Brother Nathanael a voice crying in the wilderness that will never be heard? Are Americans too dumbed down to know to care?
at 10/25/2010 No comments:

Fearful over his zionist bidding, Rense blows his patriot cover and sends Homeland Security after Mark Glenn and his family.
at 10/14/2010 No comments: 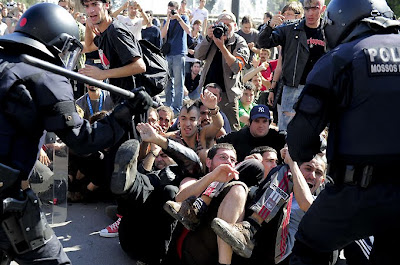 Is it a coincidence that a European terror alert is put out [based on "inside" information from Uncle Sam] in the wake of massive protests against jewish world order austerity measures? Ya think?

The Real Story
Tens of thousands of people have taken to the streets across Europe amid discontent over measures taken by the government to address the global economic crisis.

The protest organisers, the European Trade Union Confederation, were aiming to get 100,000 people to march in Brussels, the Belgian capital, where the EU's headquarters is.

Trade unions said they had called rallies in 14 capitals from Lisbon to Helsinki, while Spanish unions held a general strike.

The protesters were largely public service workers from labour unions. More of this news here and here. And a video here.

P.S. There will be no protesting people. You're either on board with the jewish world order or you're a terrorist.
at 10/04/2010 No comments: