Building Ablaze in Dubai, Will it Collapse? 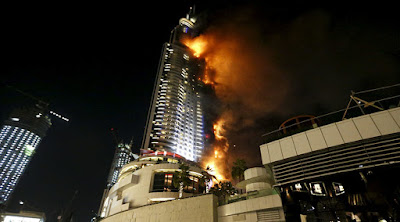 Pictures emerge on Twitter showing The Address Downtown Dubai hotel engulfed in flames. The building that hosts the 5-star hotel is 302 meters tall and is located not far from the New Year's Eve fireworks display. Link.

Any bets on whether the building collapses... a la 9/11? That would require assistance, correct?... like explosives.


Rebekah and RamJet discuss the possibilities of the next big false flag event [a la 9/11] in the USA along with some information that has been shared with Rebekah about Chicago being a likely location for at least one of the many events predicted.

P.S. Did you know that there are still people in the internet truth community that still believe the Sandy Hook shooting event was real?

Apparently there are a HANDFUL of sycophantic followers of one online delusional dope that still believe the Sandy Hook shooting event was real. There is something seriously wrong with someone [this group's capitán] who refuses to admit the truth on a matter, let alone crow about it, as a function of branding. Somebody tell the dopey cult leader of that group that whenever anyone should try to tell the truth of things, they will be maligned one way or another, e.g., as anti-Semites, Holocaust deniers etc., no matter their thoughts on Sandy Hook or any other topic.
at 12/10/2015 3 comments:

The attorneys representing the family of the suspected shooters have said the facts “don’t add up”.


In an interview with CNN, attorney David Chelsey said:


Speaking about the female suspect, Tashfeen Malik, 27, the attorney said:


She was never involved in shooting, she’s probably 90lbs so it’s unlikely she could even carry a weapon or wear some sort of a vest or do any of this.


Addressing some early accounts of the scene, he said:


Where the couple was found, from what I understand, that they were handcuffed lying facedown in this truck shot up. There’s a lot of things that just don’t make sense.

P.S. The attorney was courageous to dispute the mainstream yarn. As in the recent Charleston shooting at a prayer meeting, a professional hit team did the deed and a patsy, patsies in this case, blamed. The Charleston patsy is too mentally incompetent to defend himself; the San Bernardino patsies are dead.

Is Holocaust of Six Million Jews a Hoax?

Let's see. Was it 6 million Jews killed during WWII or 271,000? According to the Red Cross, 271,000 is the correct number. Now that's a big difference from six million and, documented facts (see below) also indicate that the Jews have been claiming the degradation and annihilation of six million of their kind since at least 1900 -- i.e., several decades before WWII ever occurred.

What is the point of this fictitious six million number? Gee, I don't know. But it might have something to do with pure propaganda that has been used to help the Jews receive BILLIONS of dollars (from Germany alone) for "reparations" for murders that never happened.

(NaturalNews) Get this: The location where the shooting was carried out today in San Bernardino -- the Inland Regional Center -- has been subjected to monthly active shooter drills, we're now learning.


This adds even more evidence to the notion that this may be a staged false flag event to provide Obama justification for outlawing private firearms ownership among law-abiding citizens.

P.S. What are the odds that the shooters would pick such a popular spot? I wonder if they were on drugs.