Did You Know that Sixty-Six Million Christians were Slaughtered by Jewish Bolsheviks? 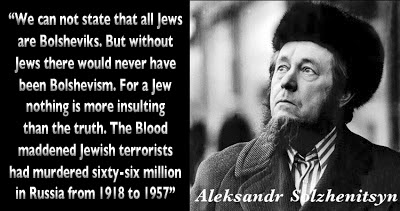 Yes folks -- you read that right. SIXTY MILLION Christians were starved, tortured, and ruthlessly murdered by Jews in Russia between 1917 and 1953. They were slaughtered in the same way that thousands of Muslims are now being slaughtered by Jews in Palestine. Yet true history is never taught in American schools and instead, American children (and children worldwide) are force fed a bunch of LIES about six million Jews being killed in Germany -- something that never happened!!!


Why do you think schools teach children lies about world history and hide The Truth? Who is writing history and what is their real agenda?


"Every violation of truth is not only a sort of suicide in the liar, but is a stab at the health of human society." -- Ralph Waldo Emerson
Read more here.
P.S. I said something similar to the above quote by Ralph Waldo Emerson to a Syrian Muslim friend today. I told him that the jews were kicked out of so many countries because their lying and deceitful ways were destroying the ability of the members of those societies to have trust and faith in each other, and therefore the jews had to be kicked out in order for those societies to be able to survive.

Repeating and reiterating part of Solzhenitsyn's above quote: "For a jew nothing is more insulting than the truth."
Truth will always be deemed "anti-Semitic" by our ruling jewish lords. That is why my fellow gentiles that we simply can never have the truth (nor real representative democracy) because then the truth would be known about jews and their judaism, i.e., their anti-Christ, anti-good religion.

P.P.S. In a time of the greatest media saturation ever and in a time when 96% of the media is in the hands of six corporations that are all Zionist, Jewish owned, it stands to reason that fabricated lies are the order of the day and the truth lies beaten, bleeding and alone in a dark alley. It has gotten to the point that you can assume that most everything you hear from these sources are lies, designed to support their world domination agenda.


The Russian Holocaust was a REAL Holocaust and only one of many done by the same people. Up to 60,000,000 were tortured and killed. This is ten times 6,000,000 and this one really happened. Now today they [jews] are at it again as Western Neo Cons in control of Western Foreign Policy have done similar in Afghanistan, Iraq, Libya, Yemen, Syria, Lebanon... it goes on and on and these [Neo Cons] are all jews...  Paul Wolfowitz, Douglas Feith, Richard Pearle, Michael Ledeen and many another.
Read more of the truth of what is going on today here.

DBS: The Usual Cabal Culprits at Work in Paris


DBS, get well. Your voice has been missed. Get well. Come back and fill the void you've left.

US Aid to Israel: Unconditional, Never Ending, Ever Increasing