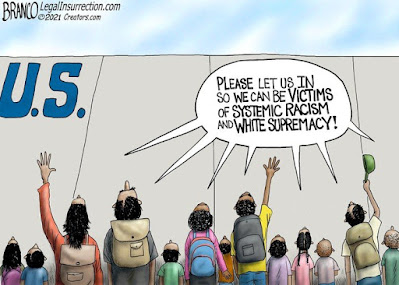 Please let us in so we can ad to the chorus against systemic racism and white supremacy here.
P.S. An on-point, must-be-heard, poignant discussion of the cost and impact of integration and coddling Afro-Americans in American society is here.
at 5/17/2021 No comments:

The Deliberate Destruction of America and the World

Andy Carrington Hitchcock is joined by Dr. Lorraine Day for a show entitled, “The Deliberate Destruction Of America And The World, Part 1 – How Do We Know This Is The Time Of The End?”

Discussed is: how the so-called COVID-19 is being used to install a Communist Regime designed to enslave the whole world; how they plan to make the vaccine mandatory; the dangers of the PCR Test; why you need to stay away from medical doctors in this day and age; how we are at the end of an age and Jesus Christ is coming back soon; why the Bible will be banned in the near future; the numerous Illuminati Roadmaps that tell us what they plan to do to us; what the so-called vaccines will do to you and when; who really runs the world; the One World Religion that will be the worship of Lucifer; how the previous so-called pandemics were just dry runs to ensure the Illuminati had enough of their Sayanim ensconced within critical roles throughout every country in the world; proof the Israelites of the Bible were not Jewish; the elimination of private property; the significance of the Bill Gates’ divorce; how more people have been killed by their own leaders than by hostile outside forces; The Report From Iron Mountain; Silent Weapons For Quiet Wars; the Richie From Boston BitChute video that claims a lot of the doctors pushing back against the vaccines are members of a New Age Organization; the only safe place you can escape to; how a virus is nothing more than a figment of Satan’s imagination; and many other topics.

Listen to the show here. Or go to Andy's site to follow other pertinent links and listen there.

P.S. Fellow gentiles, we can't have real representative government or democracy, the unmentionables are too paranoid to allow that. What's more we must all be done away with. Well, you know, my "Judeo-Christian" friends, it's what ya get for calling them God's chosen people, and putting Israel first. This is your blessing.

Is it a Vaccine or a Chip?

You tell me. See here.

Comment from source of the above video quoting Jim Stone:

To my surprise, a lot of people are having a hard time believing the above post about magnets sticking to a fresh covid injection. However, if you’re not supposed to get an MRI for 6-10 weeks after the shot, I beg to question why not? WHY NOT?? Answer: Because you can’t put magnetic materials into an MRI, and the shot needs to totally disperse, because it is indeed magnetic. And how would it be magnetic? Nanobots, obviously.

(Really inexperienced) and/or stupid people or outright trolls (and I’ll pull no punches this time) are also saying there’s no way this could work because the shot is a liquid and “anything in it would be too small to develop magnetic attraction”. That’s total horse sh*t, have people really forgotten ferrofluid? You know – that magnetic liquid used to cool the voice coils of high performance speakers? That’s not an obscure topic for ANYONE who has an ounce of tech sense. THERE IS YOUR MAGNETIC COVID SHOT, RIGHT THERE. It’s obviously not the classic ferrofluid in the shot, but there’s absolutely nothing stopping it from acting exactly the same way. I had such speakers in the 90’s and the ferrofluid was completely clear. I discovered this when I had to change the tweeter diaphragms. It was like a totally clear oil. I believe this woman’s video is legit 100 percent and am not one bit stupid. Hell yes there’s a way this could be real. There has to be a reason why you should avoid MRI’s for a period of time after the shot, WHAT THE HELL IS THAT REASON? Easy answer: You can’t go into the world’s most powerful magnetic medical equipment with a magnetic substance in you unless that substance is totally dispersed. It would rip that woman’s arm apart if she went into an MRI like that. Read about ferrofluid here.

Source of the original video above is Will, a regular commentator to Jim Fetzer's site, which was found here. Jim Stone source is here.

You should listen to this about the COVID "vaccine." And this about established, standard vaccines that are given to children as a standard practice.