Now That You're Locked Down In Your Homes, WHO Will Be Visiting You

PS1: To all of my gunshow colleagues that were afraid to see the truth about 9/11 and Sandy Hook and all the other mass shooting psyops: when they knock on your doors, they'll be coming for your guns. And when they do that, won't you feel silly about your "we back the badge" signs?

PS2: To all of my gunshow colleagues, I just went to the post office today: 4/6/2020. It's a good thing that I could count on people wearing masks staying six feet away from me. Or I might've been moved to slap someone in the face. I did however say out loud for all the sheeple in the room to hear: AMERICA, NOT HOME OF THE FREE, NOT HOME OF THE BRAVE. That was greeted with scorn, as were all of my efforts to awaken all of you over the years. Your America isn't home of the free, isn't home of the brave... nor is it home of the intelligent.
at 3/31/2020 No comments:

The Corona virus hoax is a cover for an economic reset and locking down and controlling the masses, i.e., the goyim (human cattle).

PS1: Fact checkers on the ground confirm pandemic is a hoax: here.

PS3: Troops being positioned to enforce lockdown, all COVID-19 tests will be positive: here.

PS5: More of Doctor Day (with Rick Adams): here. Bill Gates is the director of our death.

20C Man Will Be Digitally Strong And Digitally Controlled

Social distancing will be digitally enforced to prevent the spread of negative thoughts... especially any thoughts of revolting.

Addendum: The incredible synchronicity of the functionaries managing this hoax gives it away. Listen here.
at 3/29/2020 No comments:

More From Polly: Is the Corona Virus 'Pandemic' connected to Impeachment?


Polly rhetorically asks: Is the Swamp capable of this level of deception & evil? My answer: You betcha.
at 3/22/2020 No comments:

Amazing Polly: We Are Being Played


We are being played. The elites are playing God. There will be a vaccine for everything.
at 3/20/2020 No comments: 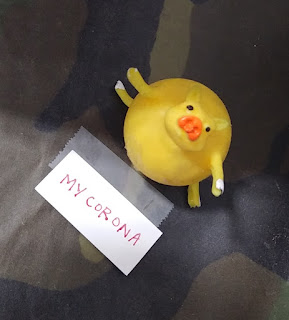 Just came back from grocery shopping. Want to thank the dumb asses that thought they were being super smart [an Afro-American couple] wearing gloves and face masks. The masks are meant to save others from their breath.

On seeing them, I couldn't help but chuckle to myself. Of course laughing out loud could've gotten me into big trouble, as I am caucasion, and that could've been deemed racist.... RIGHT IN THE MIDDLE OF A PANDEMIC!!

I also wished I didn't have to share my shopping space/time with such dumb asses. Is that racist?
at 3/16/2020 No comments:

America's Purging of American IT Workers

The reason your neighborhoods are being flooded with Indians is because American companies...every company with an IT department...is displacing American IT workers with IT workers from India.

Thus American companies save on labor costs and ensure against any possible labor unrest. There is no IT worker union. There never will be. How can there be if all of the workers are strangers to each other? Also, if any Indian IT workers decide to get uppity, they'll just be replaced with other IT workers from India.

Americans are pushed out of middle class jobs. Indians are shoe-ed in to displace them.

These are the lies of corporate leaders who have a voice that is heard and believed by our political leaders. IT workers have no voice on this.
at 3/05/2020 No comments: