Jewish Magazine: How to Cook a Gentile 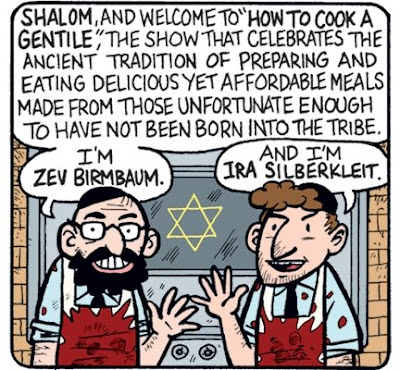 I missed it but the Jewish magazine Heeb, issued #15, The Goy Issue, carried artist Kevin Dorkin’s cartoon ‘How to Cook a Gentile.' Text and illustrations were done by Dorkin and coloring was done by Sarah Dyer.

Wikipedia describes Heeb magazine as "a Jewish magazine aimed at young intellectual Jews. The name of the magazine is a variation of the anti-Semitic ethnic slur hebe. However, in this case, the word "heeb" seeks to function as empowerment for the Jewish community, thus eliminating the hatred associated with the word."

Dorkin proudly announced the placement of his work in the magazine from his online blog thusly:

Heeb #16 [it’s actually #15] ("the Goy issue"), is now on their website, which is where you can read our one-page contribution, a family-friendly little comic strip entitled, "How to Cook a Gentile".

If you don't know what a Gentile is, well, then you're probably a Gentile. Or very stupid.

The entire strip has been posted to the site (just click on the above link to get there), so there's something free for you from the notoriously penny-clenching Jewish community. Oy, Gevalt! Will miracles never cease?

And FYI, the full and complete and collectible print edition of Heeb #16 [it’s #15] ships in a week or so.

P.S. Oy, Gevalt, Kevin! I do believe the American goyim would actually let you cook them alive for fear of calling out the truth and being "anti-Semitic." Oy, Gevalt! Look what's happening to their country! It's being pillaged... and they can't say a thing.
at 2/20/2009

You know, don't you, that if we published "How to Cook a Zionst" we'd be jailed, at the very least.

This comic proves that the Jews want a world without Gentiles and DO plan to slaughter us all.