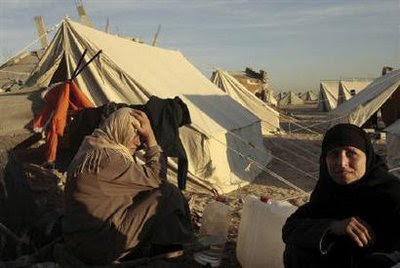 Palestinian women sit in front of tents near their destroyed house in Jabalya, in the northern Gaza Strip, February 4, 2009.

The following report was written by a delegate on a recent National Lawyers Guild delegation to Gaza:

History repeats itself. With the key to her demolished home around her neck, the middle-aged Palestinian woman standing before me had escaped the first Nakba (meaning 'Day of Catastrophe' marking the exodus of Palestinians from their homes with the creation of the State of Israel) of 1948 only to live through the second Nakba; the Nakba of 2009, which was more destructive and deadly than the first.

In order to reach the tent city in Jabalia, we walked down a long road of pure destruction and demolition; destroyed homes, mosques, buildings, bakeries and stores.

I had wanted to see the tent city in Jabalia to take pictures and talk to the residents living there. Undoubtedly, these people were the most affected by Israel's recent offensive as their livelihoods were minimized to nothing more than a 6x8 foot white tent which had no amenities and housed up to fifty persons per tent.

Wherever we looked there was destruction and children; children who had lost the roof over their heads and now stood vulnerable to not only the elements, but also to Israel's continued bombing of border villages. One child walked up and down the road with a piece of rubble tied to a long cord. It was his new toy since his old toys were lost under the ruins of what used to be his home. Men stood around, drinking tea and talking. With the backdrop of mounds of rubble and tents was another man, praying, on a piece of tarp. While the Israelis had taken away everything else of his, they did not take away his God, and to this, he bowed his head in gratitude.

These Palestinians stand under the burning sun day-in and day-out living their lives for no particular purpose. Many of them used to be farmers. Most of them had lost multiple family members. All of them had lost their homes and farms. An older woman sat in the sand swatting flies. We approached her, as we were told by the residents of this tent city that she had lived through both Nakbas – the Nakba of 1948 and the Nakba of 2009.

Born in 1945, Sabha Yousef Mohammad Abed had lived through the first Nakba but had lost her husband and her farm in the second. Sabha had left her home in Brett (sp?) near Jaffa in what is currently considered Israel-proper when the Zionist forces had first come. Her family fled from one village to the next to escape the Zionist forces until she eventually landed in Gaza, in the village of Jabalia, a few months later. After the first Nakba, she lived for a few years in tents but slowly her life improved as the tents changed into block rooms and from block rooms to actual homes and farms. While Sabha was very young during the first Nakba, she remembers the fear and the constant fleeing from one village to the next. She remembers being shot at and losing family members. She remembers the uncertainty of life and the tents and the running sewage. But more so, she remembers building her life block by block from scratch and establishing a home for herself and her family. Sabha lost this home during the first week of Israel's offensive and is now living in a tent with her children.

While Sabha has never experienced complete stability due to ongoing wars and bombardment from Israeli forces and settlers, she had never seen the magnitude of bloodshed and brutal force used against Palestinians as she saw in Israel's recent offensive. Israeli forces began their aerial strikes against Jabalia on the second day of the offensive. Israeli forces bombed homes and civilians indiscriminately as her neighbors tried to flee. Many of those who tried to flee were taken as hostages by Israeli soldiers and many others were killed or fatally injured. Those who were only mildly injured bled to death due to the lack of medical access and the ambulance drivers' inability to drive the less than one kilometer stretch from the headquarters of the Palestinian Red Cross Society to the bombed-out areas.

As Sabha spoke about Israel's recent offensive, she shook in anger. Tell me where are the militants, she kept asking. Are these children militants? Does any human being deserve to live the way we live, fifty people to one tent with no blankets, no food, no water. And where do we defecate? They have even taken away our dignity. We are less than animals in their eyes. Even animals have more rights than us. To Sabha, Israel's objectives were nothing short of genocide. The Zionists fled from a holocaust and created a new one. They want a land with no people, she stated simply. A land without people for a people who have been purged from their land. For Sabha, this was not a war with Hamas, it was a massacre, and its only objective was to eliminate the Palestinians, to wipe them from the face of the earth.

Sabha told us of how the Israeli soldiers entered their village in midday and separated the men from the women. The soldiers' faces were painted black and they shot at the villager's feet. When Sabha saw her sons being taken away as hostages, she left her aging husband and farm behind and hid in the home adjacent to the hostages. The other women were made to march to the city center under the aerial strikes and constant bombing. Those who resisted or turned back were immediately shot. All around the streets were the dead and injured. The area smelled of phosphorus and rotting bodies. Sabha stayed in hiding for many days. During that time, her husband was forced from their farm as Israeli bulldozers demolished the farm and bulldozed the walls of the farm over their goats, sheep, chicken and camels. Sabha's husband, who stood on the street and watched his farm and home being demolished before his eyes, was killed moments later by an Israeli missile. One of the farm's walls fell over his dead body, and his body lay rotting for days.

As Sabha spoke, the entire village surrounded us. Even the children stood around in a circle and added to Sabha's narrative. One girl, about seven or eight years of age, tugged at my sleeve. That was my home over there, she whispered, pointing at rubble. She was in school when the bombing started. Embarrassedly, she admitted that she was so scared during the bombings that she fainted and peed on herself. Her brother was killed as was many of her extended family.

Sabha is not alone in her anger. I have not met one Palestinian in Gaza who was not shocked and angered by the extent of Israel's brutality in the recent offensive. After conducting an interview with one of the delegates, anchorman and filmmaker Ashraf Mashharawi from British Channel 4 spoke with me about his 16 year old cousin, Ahmad, who was sliced in half by what is believed to be a DIME missile. DIME or Dense Inert Metal Explosives produce an unusually powerful blast within a small area and cause strong biological effects. The blast does not cause bleeding, but rather slices a body as smoothly as though the body was amputated. While Israel's use of DIME has not been officially confirmed, it has been unofficially confirmed by weapons experts and doctors who have visited Gaza.

Having seen pictures of these DIME-caused amputations, I must admit that it is the most horrifying sight one can imagine. One of the doctors at Al Awda Hospital showed me a video on his cell phone of a baby girl who was similarly sliced in half. Her top half was black from the blast and her bottom half was gone, cleanly cut from the waist down as her guts and insides were exposed for the world to see. In the video, when the doctor – who had undoubtedly seen death in all its forms – approached to see her, he fell to the ground and started wailing. I cannot describe the sight of the girl. Even now as I write about it, I feel light-headed and nauseous. No news station, not even Al-Jazeera, agreed to film this girl. Having seen the doctor's video, I can only sympathize.

Today is Israel's elections. Yet for the Palestinians, the question is not who will take over Ehud Olmert's position, but rather, when will be the next Israeli offensive, how many more Palestinians will be killed, and what will the next genocide that will undoubtedly wipe the memory of all Palestinians living in Gaza look like. Before leaving the tent city in Jabalia, I told Sabha that insha'Allah I will come back to see her in better days, in happier days. She laughed and patted my hand. When you come back, she said, you will be lucky to see any Palestinian left alive here. But maybe its better that we are killed, this life has been hard and painful. I have only wanted peace and stability throughout my life, and have gotten neither. Now I have lost hope. I have lived through many wars, yet I have never seen any war like this before. That is why I know that Israel is out to eradicate us. It failed to eliminate us this time, but will not fail next time. That is why I don't think you will come back and find us next time. Alhamdulillah (thanks to God), that is all I can say. Alhamdulillah.