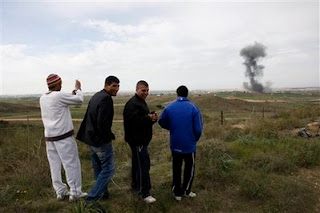 Israelis watch and take pictures of an explosion during an Israeli missile strike in the northern Gaza Strip, near the Israeli community of Netiv Hasara, Saturday, Dec. 27, 2008. Israeli warplanes pounded dozens of security compounds across the Hamas-ruled territory in unprecedented waves of air strikes Saturday, killing at least 155 and wounding more than 310 in the bloodiest day in Gaza in decades. (AP Photo/Bernat Armangue)

P.S. Unfortunately the massacre continues as of this posting, as Israel has promised to continue it's bombing raids throughout the night.
at 12/27/2008