Israel Says Merry Christmas to the World with Slaughter in Gaza 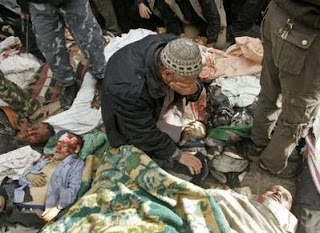 Human Rights Defenders from Lebanon , the UK , Poland , Canada , Spain , Italy and Australia are present in Gaza and are witnessing and documenting the current Israeli attacks on Gaza .

Due to Israel 's policy of denying access to international media, human rights defenders and aid agencies to the Occupied Gaza Strip, many of these Human Rights Defenders arrived in Gaza with the Free Gaza Movement's boats. FREE GAZA boats have broken Israel 's siege of Gaza five times in the past four months.

"At the time of the attacks I was on Omar Mukhtar street and witnessed a last rocket hit the street 150 meters away where crowds had already gathered to try to extract the dead bodies. Ambulances, trucks, cars - anything that can move is bringing injured to the hospitals. Hospitals have had to evacuate sick patients to make room for the injured. I have been told that there is not enough room in the morgues for the bodies and that there is a great lack of blood in the blood banks. I have just learned that among the civilians killed today was the mother of my good friends in Jabalya camp." - Eva Bartlett ( Canada ) International Solidarity Movement

"Israeli missles tore through a children's playground and busy market in Diere Balah, we saw the aftermath - many were injured and some reportedly killed. Every Hospital in the Gaza strip is already overwhelmed with injured people and does not have the medicine or the capacity to treat them. Israel is committing crimes against humanity, it is violating international and human rights law, ignoring the United Nations and planning even bigger attacks. The world must act now and intensify the calls for Boycott, Divestment and Sanctions against Israel ; governments need to move beyond words of condemnation into an active and immediate restraint of Israel and a lifting of the siege of Gaza " - Ewa Jasiewicz (Polish and British) Free Gaza Movement

P.S. Israel says Merry Christmas to the world in the only language it knows: death to the goyim.

I hope naive gentiles are seeing the pattern of zionist "diplomacy." First they starve and disable their enemies [who are any decent human beings that can't swallow zionism] while they're talking peace. Then when they believe they're most vulnerable and unable to fight back, they follow for the kill, which they have been scheming all along.