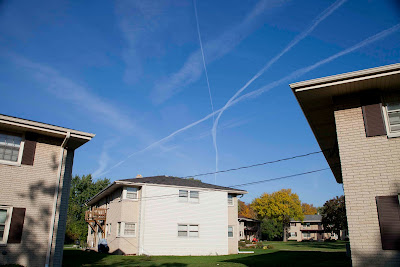 P.S. The thin line in the sky is a fresh cloud being formed from the tail end of an airplane flying way up high in the sky. There were several airplanes doing the same thing. This is the second time I've seen this. The first was when I happened to look up at the clear blue sky on an early morning walk. That day two high flying planes were creative enough to form a checkerboard pattern over the entire sky overhead. And that day too, the sky would've been a pretty clear blue sky... but for the chem clouds.
at 10/08/2011

I recognize that area of Milwaukee. I am in that area quite a bit. They have been hosing Milwaukee pretty bad lately, even at night.

Damn right! Just this this past Friday afternoon was talking to my neighbor and happened to look up and saw the same damned thing... sky which would otherwise, naturally, would have been a clear blue sky, completely clouded over with nothing but chem clouds... and a little airplane painting new ones.

Another airplane just happened to be flying by in the same area... that airplane wasn't leaving behind a white exhaust across the sky... hmmm.

I pointed this out to my neighbor.

I was surprised that she accepted my view that the little one leaving behind the white exhaust was creating chem clouds, and that all the clouds in the sky that day were artificial chem clouds... for nefarious reasons.