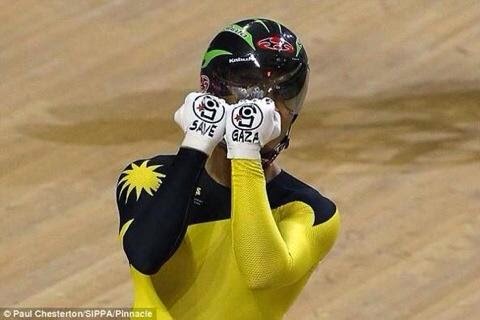 Melbourne-based Malaysian cyclist Mohd Azizulhasni Awang had been reprimanded after wearing gloves with the words ‘Save Gaza’ during his quarter final cycling race at the Commonwealth Games in Glasgow, Scotland, on Thursday.

The words ‘Save Gaza’ inscribed on his gloves were shown to television cameras after Azizul beat England’s Philip Hindes to seal a quarter-final berth. The inscription was seen to be a political protest related to the recent intensification of attacks between Israel and the Palestinian Hamas faction in the Gaza strip.

Following the event, he was warned by the Commonwealth Games Federation Chief Mike Hooper that he would see a removal of his accreditation if he does it again.

“The actions were investigated and we spoke with the Malaysian team management,” said Hooper on Friday.

“It’s inappropriate for any form of protest, etc. in a games venue. We respect everyone’s right to protest … however it is inappropriate.”

Azizul however explained that it was not a political protest.

“I feel sorry to the people who misinterpret my message. There’s no such thing with political protest,” wrote Azizul on his Facebook page.

“It’s from the bottom of my heart to express humanitarian (thoughts). Since when (is) expressing humanitarian considered as political?