Anti-Semitic Musing 012: Should Israel Be Considered A Civilized Nation? 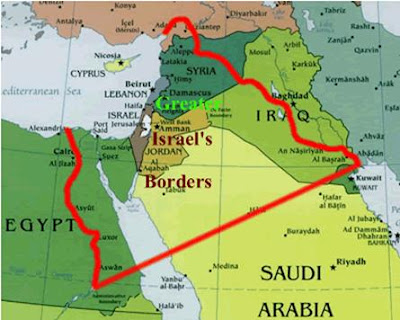 From "Israel Does Not Exist!" by Jim Kirwan:

You would think that after all the time that has passed since Israel declared itself to be a state among the community of nations; that by now, it would be at least an accepted fact in the world. However you would not be correct. Israel is a place that has yet to finish claiming, what 'it' sees as its own border-rights; see the map above.

In the map you can see that Israel wants a piece of Turkey; more than half of Syria; more than half of Iraq; a tiny bit of Iran; nearly half of Kuwait; more than a third of Saudi-Arabia; half the Red Sea; All of Suez; a large chunk of Egypt; and All of Jordon, Palestine and Lebanon. That is what Israel is demanding from the Middle-East in exchange for "peace in the region." Instead it is Israel that must be delegitimized and censored not the rest of the world!

Fact is Israel continues to violate every tenet of national and international law; regardless of the nation that feels they have been either raped or robbed-blind by this international teen-ager that has no respect for anyone but themselves.

In fact they have recently begun a campaign to slaughter everyone-else-in-the-world that is not an authentic Israeli. This alone is enough of a reason to "cast-out" Israel from the community of nation-states. Israel cannot be allowed to act as judge, jury and executioner over the lives of every other person on this planet, simply because they come from a tribal state that is not part of the twenty-first century: And is not even made up of tribes that can communicate with each other. (1)

"Rabbi Yitzhak Shapiro, who heads the Od Yosef Chai Yeshiva in the Yitzhar settlement, wrote in his book "The King's Torah" that even babies and children can be killed if they pose a threat to the nation.

Shapiro based the majority of his teachings on passages quoted from the Bible, to which he adds his opinions and beliefs.

"It is permissible to kill the Righteous among Nations even if they are not responsible for the threatening situation," he wrote, adding: "If we kill a Gentile who has sinned or has violated one of the seven commandments - because we care about the commandments - there is nothing wrong with the murder."

This 'problem' gets blamed on a few Rabbis' many of whom are revered inside that country-that-is-not a state. But in reality this 'problem' goes far beyond the border dispute that began in 1948. Because this situation has become central to the issue of when any state, anywhere, becomes an "outlaw-nation." In this case it seems that Israel has actively sought that status since the 'idea' of Israel was born.

Today it was announced that Israel will offer sanctuary to yet another War-Criminal: this one being the soon-to-be-deposed "leader" of Egypt: Hosni Mubarak. The United States has long been the haven of deposed-dictators, but even we could not stomach bringing this criminal over here. So Israel stepped up and showed the world where its real sympathies have always lain. (2)

Mubarak according to George Galloway: "That there are many governments responsible for this great crime in Palestine. But the dictatorship of Hosni Barack is jointly responsible for the murder of every Palestinian who has died these last few years when he was embracing Libney as the bombs were falling; when he locked the border of Raffia he became an international criminal, and an outlaw of the Arab world. So I call in conclusion on the great people of Egypt; on the heroic armed forces of Egypt; on the heroic army of Egypt of 1973 - to rise up and sweep away this tyrant Mubarak. To rise-up; to rise-up and to demolish the border at Raffia and LET THE PEOPLE GO FREE!" (3)

'The only way to stop this nightmare is to delegitimize Israel Embassies worldwide: They have never been a legitimate nation - ever.

It is time for the civilized world to throw out all the Israeli embassy's, and pull their own embassy's out of Israel. Israel has chosen to ignore all international and state laws of every country they have gone into; and it's way past time to withdraw all diplomatic relations-globally!

This would be the least bloody solution to the continuing crime that Zionism has been giving to the world since 1948. Taking in this war criminal is just about the last straw in international relations in the nearly permanently destabilized Middle-East and Israel ought to be punished accordingly-not just for Mubarak-but for everything they have planned using their Mossad and other death-squads around the world as well as their stated goals as seen on the map at the top of this article!'

Israel's main export today is pure violence that is cloaked as "security-services." There is nothing positive that has ever come from this brooding and vengefully paranoid "state' that could ever add anything to the human condition. It is time for Israel to be delegitimized-forever!

Source article with references can be located here.
at 1/31/2011