10 Hard Facts about the Holocaust

From Visible's latest article "Armies of Zombie Chipmunks Marching on the Hamster Wheel of Darkness":


The right wing liars convention [Republican debate] took place [just the other] night. I missed it but I didn't miss anything. Millions of chittrering chipmunks saw it however and probably didn't think very much at all about those wounded chipmunks, homeless chipmunks, drug addled, alcoholic chipmunks and especially all the dead chipmunks that got shot and blasted and blown to pieces in Banker Wars and... that's a good thing, as far as the bankers are concerned ...because more war is on the menu. A hundred years ago when the bankers took over the Federal Reserve, they immediately got to work on World War One where such wonderful battles like the ones at Somme, Passchendaele, Gallipoli and the Serbian Campaign took place; beautiful exercises in terror, torment and butchery. Twenty years later they orchestrated World War Two, which started when Tribe Satanists declared war on Germany and then brought it about through their banker offspring who controlled the US economy. They made a bundle off of both of those and then, twenty years or so later they were in Vietnam. Next thing you knew there were a lot more dead and wounded chipmunks. By this time, the bankers had figured out that they could make enormous amounts of money from dead chipmunks. Actually they figured that out much earlier but all this time they were working their way up to permanent war and permanent profits so... they got together and arranged a horrific attack on the American mainland from their Mafia crime nation of Israel.

Once they had accomplished the 9/11 attacks and blamed it on some Muslims, who were in no position to do something like this, they were able to declare war on every Muslim nation in the Middle East that Israel wanted to destroy and then loot. So... instead of a Banker War every twenty years, they were now able to have war all the time.


What they are up to, what they intend, is far worse than anything that has been said so far but the chipmunks will keep right on dying in pointless wars and killing themselves in all kinds of ways because that's how they are.

P.S. In Visible's article he offers some insight on how not to be a chipmunk. Read his excellent article here.

My fellow gentiles, as reasoning human beings, we should have the right to self preservation, and not be chipmunks, i.e., serving a dirty, secret, foreign agenda. Let us insist on it. If we don't, things will get much worse (as is also suggested in this excellent article here).

My fellow gentile Americans, wake up. We are in the 12th hour of the existence of our nation. Let us make it our nation before it is too late. We must through off our jewish yolk if we are to survive.

P.P.S. I found both excellent articles referenced above linked to the NorthernTruthSeeker blogspot here. 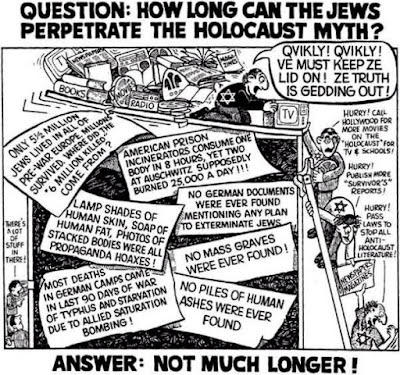 For the truth, go here.

P.S. No matter how much truth-movement huckster Mark Glenn says attempts at exposing the holocaust lie is a vain endeavor [e.g. here], keep doing it. I never thought the Berlin wall would come down. The same goes for every jewish fraud used to control and manipulate the masses, including Sandy Hook, no matter what huckster Glenn says (here).
at 1/12/2016 No comments: